Chongqing - Megacity at the Confluence of the Yangtze and Jialing Rivers

The direct-controlled municipality of Chongqing is thriving, with dynamic population and economic growth 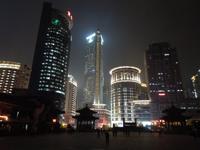 Chongqing (重庆, 重慶, Chóngqìng, "double celebration"), one of the largest cities in China and possibly the world, is spectacularly situated on heights at the confluence of the Yangtze and Jialing Rivers in southern China, within the Red Basin (or Sichuan Basin) and near the Three Gorges Dam. The city has a subtropical climate: summers are hot and humid, while wintertime has mild temperatures and persistent fog. As “Fog City”, Chongqing offered the government under Chiang Kai-shek an ideal retreat to survive air attacks by the Japanese during World War II. A number of companies from the coastal regions were moved into the suburbs of Chongqing, which accelerated the city’s economic development during the Second World War up until communists took power. 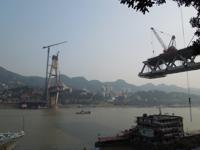 Since Chongqing together with a surrounding area the size of South Carolina was split from Sichuan in 1997, and made a direct-controlled municipality (直辖市, 直轄市, zhíxiáshì) immediately under the central government, the city has developed rapidly as the recipient of massive infrastructure spending. At the present time, with 4.3 million inhabitants in the city proper, about 8 million in the surrounding area and 30 million inhabitants within an entire administrative area that is the size of South Carolina, Chongqing is one of the largest cities in the world. The population of Chongqing itself continues to grow by 1000 people per day, which is a major challenge for the city.

The hilly terrain does not offer much leeway, with the result that the city is quite densely built up with skyscrapers that reach up to about 250 meters in height. Houses built in 1980 are already being torn down and replaced with newer, multi-story buildings. Since a number of older buildings still line the cityscape, and some very old houses are still present especially in very steep, hilly districts, there is a stark contrast between the different architectural styles. Some street scenes appear rather chaotic as a result, but have a charm of their own that is not found in other modern Chinese cities like Shanghai and Beijing. 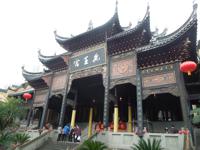 Within the skyscraper canyons, tourists who are looking for Chinese national and regional traditions will find attractions on a more human scale, such as the Luohan-Temple and the Huguang Guild Hall. In the Three Gorges Museum, you can admire numerous exhibits of items that were saved before the flooding that accompanied construction of the Three Gorges Dam. In addition, a typical, slightly pungent odor issues from many of the food stalls lining the streets. The spicy food, which will contain several chili peppers in each serving, is especially challenging to the palate for many Western visitors. The city is well known for the Chongqing hot pot, a type of Chinese fondue in which each of the diners cook their own meat and vegetables by simmering the food in a mixture of oil, water, chili peppers and other spices. Ciqikou (磁器口, "Porcelain Port") is a city more than 1000 years old that still shines with its former glory and is known as "Little Chongqing". Here is an opportunity to experience some traditions rather intensely - the city has become overrun by tourists, and focuses on the sale of souvenirs and culinary specialties. 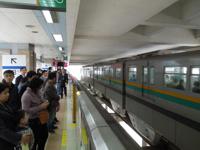 Unlike Shanghai, significantly fewer foreigners are encountered in Chongqing. Still, anyone with good English skills can easily use "Chongqing Rail Transit" (CRT) system, since announcements are made in both Chinese and English and one can select the language used by the ticket vending machines. In restaurants one must improvise, or wait for someone with knowledge of English to appear to make themselves understood. However, people are generally warm and want to be helpful, so that the language differences don’t seem to be too much of a problem. When using a taxi, though, it is recommended to keep handy the desired street and hotel names written in Chinese characters.

Further information and tips can be found in the corresponding linked pages. Small stumbling blocks such as arranging the visa, travel booking and currency exchange should not stop anyone from visiting this exciting city!