Travel from the airport to Chongqing center city can be done by taking a taxi, Line 3 of the Chongqing Metro, or a bus. A taxi ride takes about 40 minutes and costs 50 yuan. It is recommended to have on hand the hotel name and address written in Chinese characters, because some taxi drivers do not understand English. It is much more cost effective to use the Metro. For only 7 yuan, one can get from the airport at the tip of the Yuzhong Peninsula to Chongqing center city with one transfer in less than one hour. Unfortunately, International Terminal 1 is a bit remote, so that a 15-minute walk is necessary to reach Terminal 2 and the public transportation stations. The situation will improve in the future when the future Terminal 3 opens in 2015, since it will have a subway that connects with high speed trains, and it will be possible to reach even more distant cities easily. 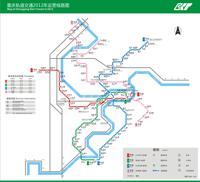 The CRT (Chongqing Rail Transit) represents the backbone of public transportation system in Chongqing. Line 3 provides direct connections between the main districts of Chongqing; it runs from the airport in Yubei to Jianbei, over the Jialing River to Yuzhon, and further over the Yangtze River to Nan'an. Other legs of the transportation network are Line 6 in the Jianbei District, Lines 1 and 2 in Yuzhong, with Line 1 running toward Shapingba and Line 2 toward Jiulongpo. The map of the Chongqing Rail Transit lines linked at the right should be used with caution, however, as some of the lines and stations included are still under construction and will be opened until 2013 or 2014. In addition, additional lines are planned in Chongqing, so the options for getting quickly from one point to the next will be significantly improved. The Google Map of the route network is constantly updated.

The ticket vending machines for the CRT are easy to use, since they can be operated in English and conveniently display an up-to-date route network. You should keep on hand a supply of 1 yuan coins and small bills (5-20 yuan) to use in these machines. Every station includes a ticket counter where you can purchase tickets using larger bills. It is a good idea to have a map on hand to show your destination, to quickly resolve any communication problems. 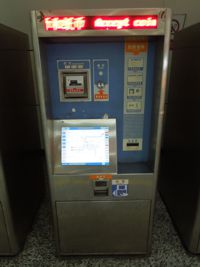 The ride from the airport to Lingjiamen - thus to Jiefangbei CBD - takes 50 minutes and costs only 7 yuan. Keep your ticket until the end of the ride, since you will need it to go through a turnstile at the destination station. If you exit at the wrong station or don't have your ticket, you must pay extra. Since the lines are labeled in English on the map and stops are announced in English, it is unlikely that you will miss your stop. If you do, simply take the train going in the opposite direction back to the correct station. Unfortunately, there are no "day pass" tickets available that are valid for one day over the entire route network. Thus, a ticket must be gotten from a vending machine for each trip.

Incidentally, Lines 2 and 3 have a monorail design. The uneven topography of Chongqing requires some steep grades and tight turns, and an elevated light monorail railway line could be built rapidly above the street, so this design was preferred at the first stage of developing the Chongqing Metro light rail system. In this respect, the Chongqing light rail system leads the world with 45 miles (72 km) of monorail track. Additional rail transport lines linked to the light rail system are being designed as conventional rail lines, and run through Chongqing mostly via tunnels, such as Lines 1 and 6.

The Airport Station on Line 3 is about a 15-minute walk from the International Terminal. 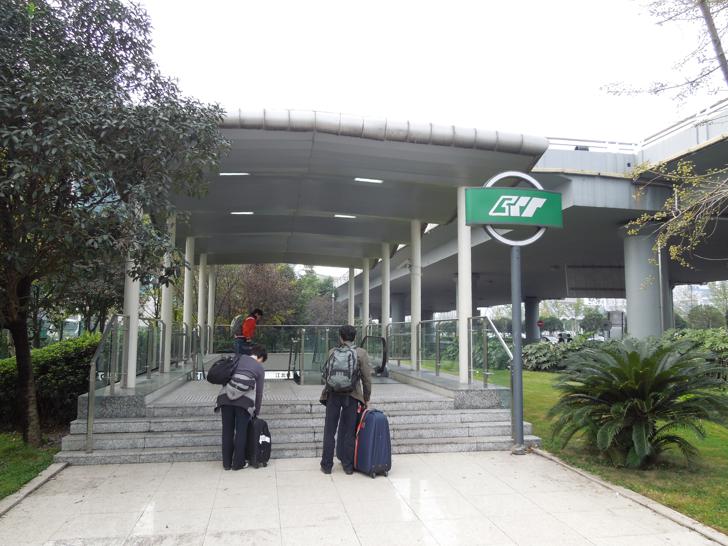 Cars in the relative long trains on Line 3 are sparsely occupied at the beginning of the journey: 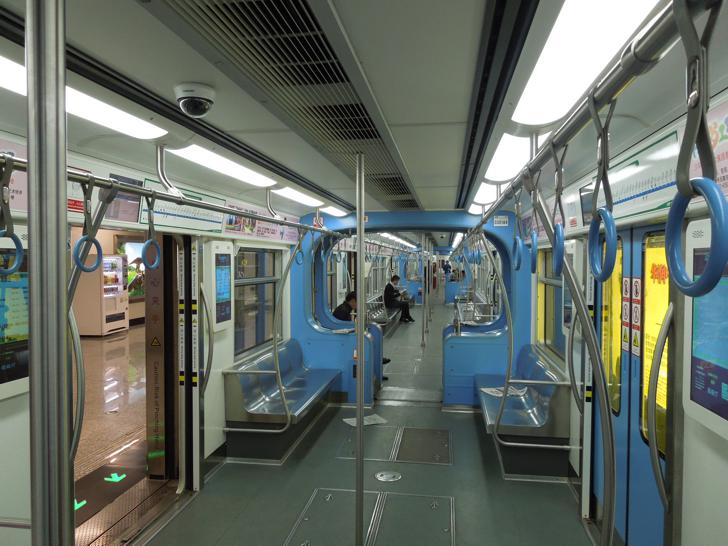 Fascinating views can be taken in over much of the route, since most of the monorail is designed as an elevated train: 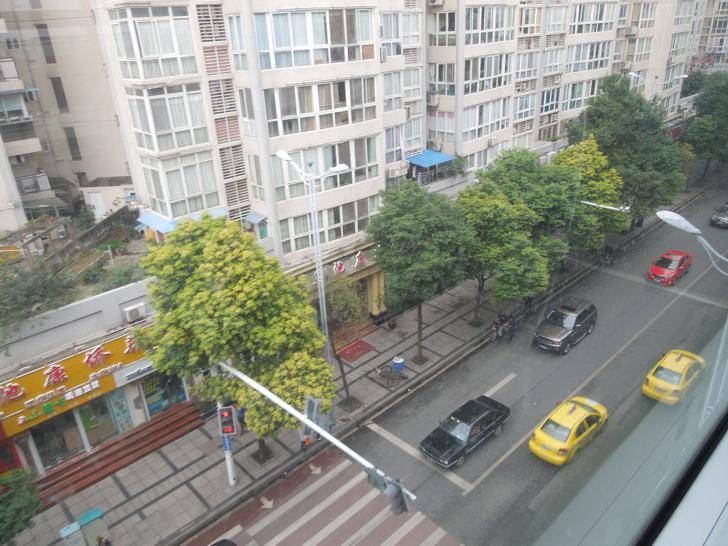 The stations become much busier when the train nears the city center: 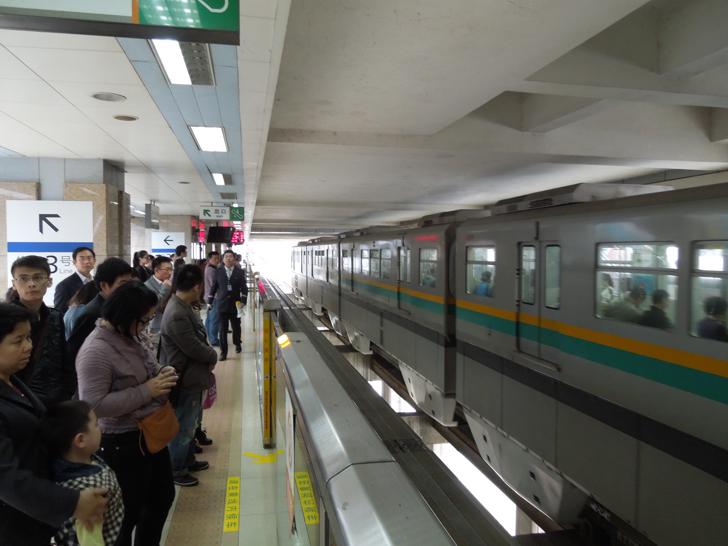 The extensive network of the monorail system makes it unique - here is a train on Line 2 at the entrance to the transfer station with Line 3: 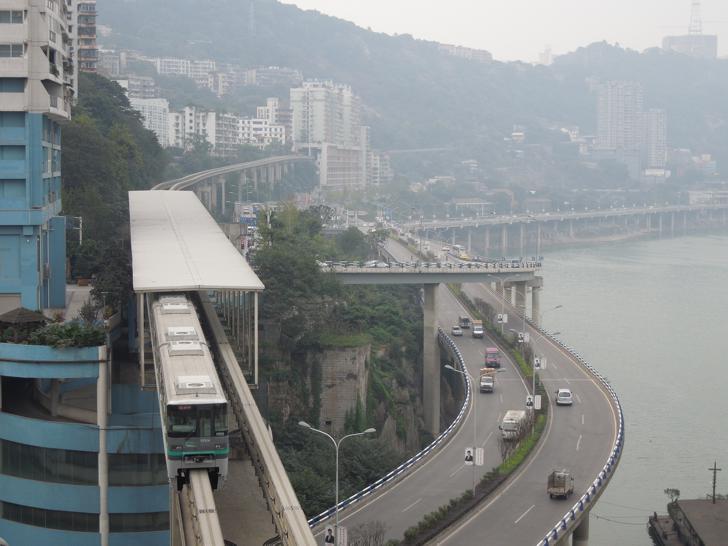 The rail line follows tight curves that hug the hillside: 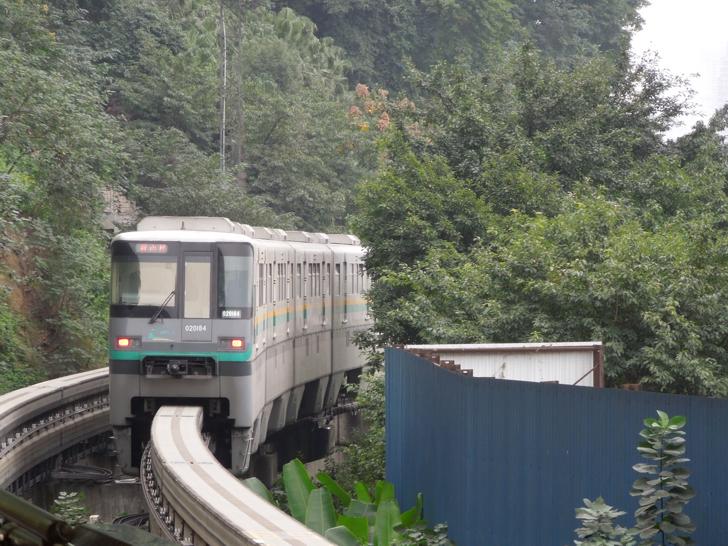 Arriving and departing trains at a smaller station. Safety is taken very seriously: 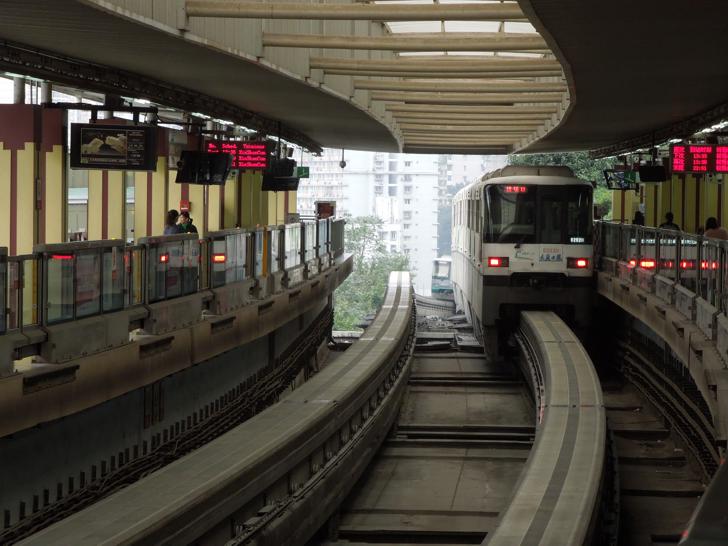 hile there is still a bus network with good coverage in the city, using the buses is significantly more complicated because route maps and vehicles are labeled only in Chinese. 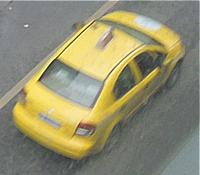 The density of yellow taxis in Chongqing is amazing! At first, it is also quite remarkable that no bicycles appear on the road. However, this is most certainly due to the uneven topography of Chongqing, which precludes comfortable cycling and leaves only the option of riding a taxi for anyone without a car. The inexpensive taxi fare might explain their popularity, since the base price for the first three kilometers to 8 yuan, after which one pays 1.80 yuan per kilometer. There is a 15% surcharge on taxi fares at night. If you wish to avoid communication problems with the Chinese-speaking drivers, be sure to have on hand the hotel name and address, or the name of a landmark written out in Chinese characters.